Located close to the south-west border of Southern Australia sits an old, rural mining town. The history of Broken Hill NSW is an intriguing one. This amazing mining city in the far west of Outback New South Wales (NSW) was once referred to as the “Silver City”. It owes its founding to the discovery of a rich line of lode in the mid-1800’s. 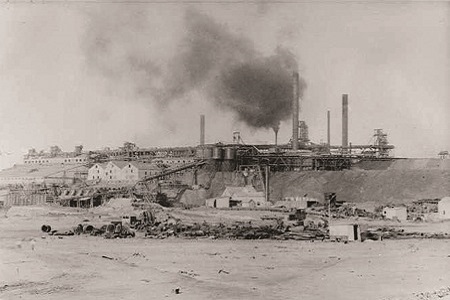 The history of Broken Hill NSW began with the discovery of one of the world’s richest silver-lead-zinc ore-body mines in the “broken hills” of the Barrier Ranges by Charles Rasp in 1844. Some of the other names that Broken Hill has been called include “Oasis of the West” and the “Capital of the Outback.”

The original “broken hills,” where Rasp found the minerals and later was the site of the first mine, has since disappeared. Over time, that entire area of the Barrier Range was completely mined. Many new mines were developed in the 1920’s which was the reason that the history of Broken Hill NSW continued after the original discovery of lode. Since most of Broken Hill is quite far from a major water supply, original settlement here was virtually non-existent due to the remote location. After the mineral discoveries, minerals were transported from Broken Hill via the Silverton train, unlike most mining communities that used nearby waterways. Additionally, water itself was transported into Broken Hills for use in the mines by train. It wasn’t until after World War II that a water pipeline was run to Broken Hill.

The area was originally referred to as Wilyama and the local Aboriginal population called this area the “Leaping Crest.” Broken Hill is divided into a northern and southern part by a railway. The center of Broken Hill is just north of a large mullock (mine waste material) heap which is one of the town’s distinguishing features.

Today, Broken Hill is still a very popular destination to view this amazing mining town. Additionally, due to the extensive daylight hours in this area of the world, Broken Hill was considered an excellent location for a solar plant. The construction of the Broken Hill Solar Plant was completed in 2015 and is one of the largest in the Southern Hemisphere.

Some of the recent attractions that have built up around this once desolate mining town include, The Living Desert Reserve and several mineral and mining museums. The Living Desert Reserve is found in the Barrier Ranges and located just 9 kms from the City of Broken Hill. Providing walking trails, fitness trails, and a predator-proof surround fence to allow viewing of the beautiful outback, the Reserve includes a Sculpture Site that is often visited. The Sculpture Site majestically displays 12 sandstone sculptures in the open air display, each with their own, unique story.

In and around Broken Hill NSW there are many mines recently built or being built. In addition to mining ore, Broken Hill has busy gold, copper, and molybdenum mines. The history of Broken Hills NSW is the story of a mining town in the southern, rural Australian outback. It has employed many miners throughout its history and is still a major mining employer today.